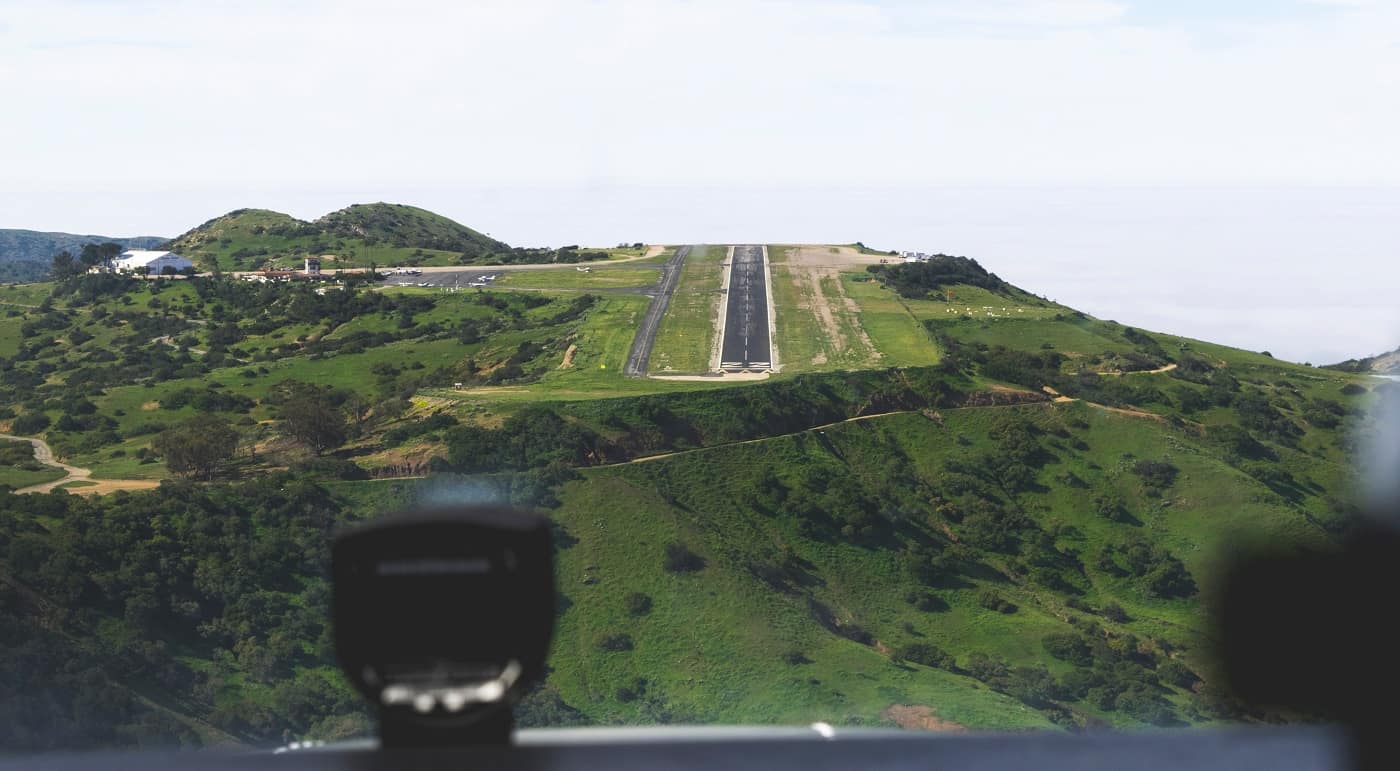 Why Do Pilots Do A Go Around?

A “go-around” is a maneuver that pilots often perform when landing conditions are not ideal. Due to less than ideal conditions on their final approach, pilots will choose to abort the landing and “go-around” the pattern to make another attempt.

There are many reasons that a pilot may choose to do a go-around. Six of the most common reasons are:

It’s probably more accurate to refer to these reasons as categories than specific events. There are literally dozens of examples that I could offer for each. For this reason, I’m not going to try to cover every possible circumstance. Instead, I’ll focus on the broad set of circumstances for each.

We’ll explore these in more detail below. However, let’s touch on a couple of important points first.

A Go Around Is Not Indicative Of A Problem

When flying commercially, I often notice that many passengers get nervous when the pilot decides to do a go-around. They seem to think that something is wrong. I can only assume that this is the result of them not understanding the reasons for doing so.

Go around maneuvers are normal and very common. In fact, pilots are taught from the beginning to always go around if there’s anything about their approach that they don’t like. Anything. This is what they’re supposed to do in order to ensure the safety of all on board.

There used to be a “stigma” about going around. Some in the pilot community looked at it as a reflection of poor piloting skills. Some would even go as far as openly ridiculing other pilots for executing this maneuver.

Fortunately, those days are largely in the past. Failing to go around when conditions weren’t right has been a major contributor to accidents. This knowledge, combined with a concerted effort on the part of the flight instructor community, has resulted in a much more positive attitude towards going around.

Repercussions For Doing A Go Around

There are NO repercussions for a pilot doing a go-around. If a pilot chooses to execute this maneuver, he/she will not be “in trouble” or have to explain him/herself to anyone. Nor will he/she have to fill out any paperwork of any kind.

The Pilot In Command (PIC) is responsible for the safety of the flight and as a result, has broad authority to do whatever he/she deems necessary to fulfill that obligation.

Reasons For A Go Around

There are many reasons that a pilot would execute a go-around. In fact, there are so many potential reasons that it’s impossible to list them all. This is by no means an all-encompassing list. However, these 6 reasons are some of the most common and cover a broad range of possible situations.

One of the most common reasons for a go-around is the broad category of a runway incursion. This is when there’s something on, or close to, the runway that may pose a threat. Perhaps it’s another aircraft, an airport vehicle, or even wildlife.

This is very common at uncontrolled airports where there’s no tower to control aircraft movements. Here, pilots are responsible for communicating with other aircraft and conducting movements according to standard procedures. However, this doesn’t always happen as it should.

Sometimes, pilots don’t follow the rules. Even more often, they just don’t see other aircraft. The visibility from the cockpit of an airplane on the ground isn’t nearly as good as it is from the top of a control tower.

Traffic conflicts are a common reason as well. It could be that another aircraft in the vicinity makes an unexpected course change. At controlled airports, it’s also very common for the controller to direct a pilot to go around due to heavy traffic in the area. Since a controller’s primary responsibility is to ensure separation (keep aircraft a certain distance apart), sometimes the only way to do this is to send incoming traffic around.

It’s also common for pilots on their final approach to be notified by ATC that there’s other traffic nearby. If the pilot can’t see the other aircraft, a go-around is usually a good option. Trying to land when you can’t see nearby aircraft is usually not the safest course of action.

In order to land safely, pilots need to make sure that they have their aircraft on a stable approach. This means, among other things, that they need to be lined up with the (correct) runway. They also need to maintain proper airspeed, altitude, and rate of descent.

Read also: What Are V Speeds?

If the pilot is too fast, too slow, too high, too low, or not properly aligned with the runway, they are on an unstable approach. If their approach is not stabilized quickly and within a reasonable distance from the runway threshold, a go-around would be in order.

The aircraft is on short final (meaning the last half-mile or so of the landing approach). The pilot has the airplane at the perfect speed, altitude, and descent rate. It’s looking like the pilot’s going to “grease the landing”.

Just as the plane crosses the numbers, a 15-knot crosswind rolls the airplane violently to one side. This is the perfect time to go around. While this is similar to an unstable approach, it’s different in the sense that the approach was stable until there was a sudden change at the last second.

These types of events can be caused by crosswinds, downdrafts, or even sudden control inputs by the pilot.

The moral of the story is that when a stable approach suddenly becomes unstable, it’s a good idea to abort the landing and try again.

A bounced landing usually results from trying to land with an unstable approach. The pilot may only be a little fast or descending a little too quickly. However, it only takes a little bit for the airplane to refuse to return to the earth. Airplanes do, of course, want to fly.

One bounce isn’t a show-stopper. If the pilot can keep the aircraft under control and quickly stabilize the descent, he/she can land the plane in a perfectly safe manner.

If, however, the plane bounces more than once, it’s time to hit the throttle and try again. Multiple bounces can compound the instability of the plane and exacerbate the situation. The result of which is entirely predictable.

Sometimes, it just doesn’t feel right. There may not be any specific issue or problem, at least not one that the pilot can readily identify. Something is just “off”.

That’s okay. Go around and try it again. We won’t judge.

Missed Approach vs. Go Around

A go-around is often confused with a missed approach. These are, in fact, two different things.

As noted previously, a go-around is a maneuver. When the pilot decides to execute this maneuver, he/she will immediately add full power to the engine(s) and pitch the aircraft for a climb. After reaching an appropriate airspeed, the pilot will retract the flaps and landing gear as required. Once at the correct altitude, the pilot will re-enter the pattern to make another landing attempt.

Pilots may make as many attempts at landing as required. If they determine that they need to do multiple go-arounds until the conditions are right, that’s what they do.

Read also: How Do You Enter And Exit The Traffic Pattern At An Uncontrolled Airport?

A missed approach is a procedure. If flying IFR (Instrument Flight Rules) and/or into a controlled airport, when a pilot initiates a go-around, they usually are directed by the tower controllers to execute the missed approach procedure. This procedure usually entails the pilot flying to a specific waypoint and entering a holding pattern at a specific altitude.

It’s important to note that while a go-around is a maneuver, a missed approach is a procedure. A pilot can execute a go-around without executing a “missed approach”. For VFR flights in most light aircraft, a go-around simply means that the pilot will increase his/her speed and altitude to re-enter the traffic pattern.

As an example, below is the approach plate for runway 26R at Ontario International Airport in Southern California. An approach plate is a printed chart of all of the approach procedures for a given runway. It includes everything a pilot needs to know to land safely, including airfield elevation and communication frequencies.

There are three important areas to note on the example below. The first is the notes section at the top regarding a missed approach (circle #1). This section explains the procedure.

In this case, the pilot is to climb to 2,200 feet, then initiate a climbing left turn to 4,000 feet. This part of the procedure is visualized in circle #2.

He/she is then to fly direct to the PDZ VORTAC (“Paradise” navigation beacon) and enter the established holding pattern. You can see the little “racetrack” that represents the pattern on the chart in the area marked as #3.

This gives the pilot all the information they need to execute the missed approach.

Pilots do a go-around when they feel the landing conditions are less than ideal. There are many reasons for making this decision. All of these come down to a single reason.

It’s the Pilot In Command’s responsibility to ensure the safety of the flight.