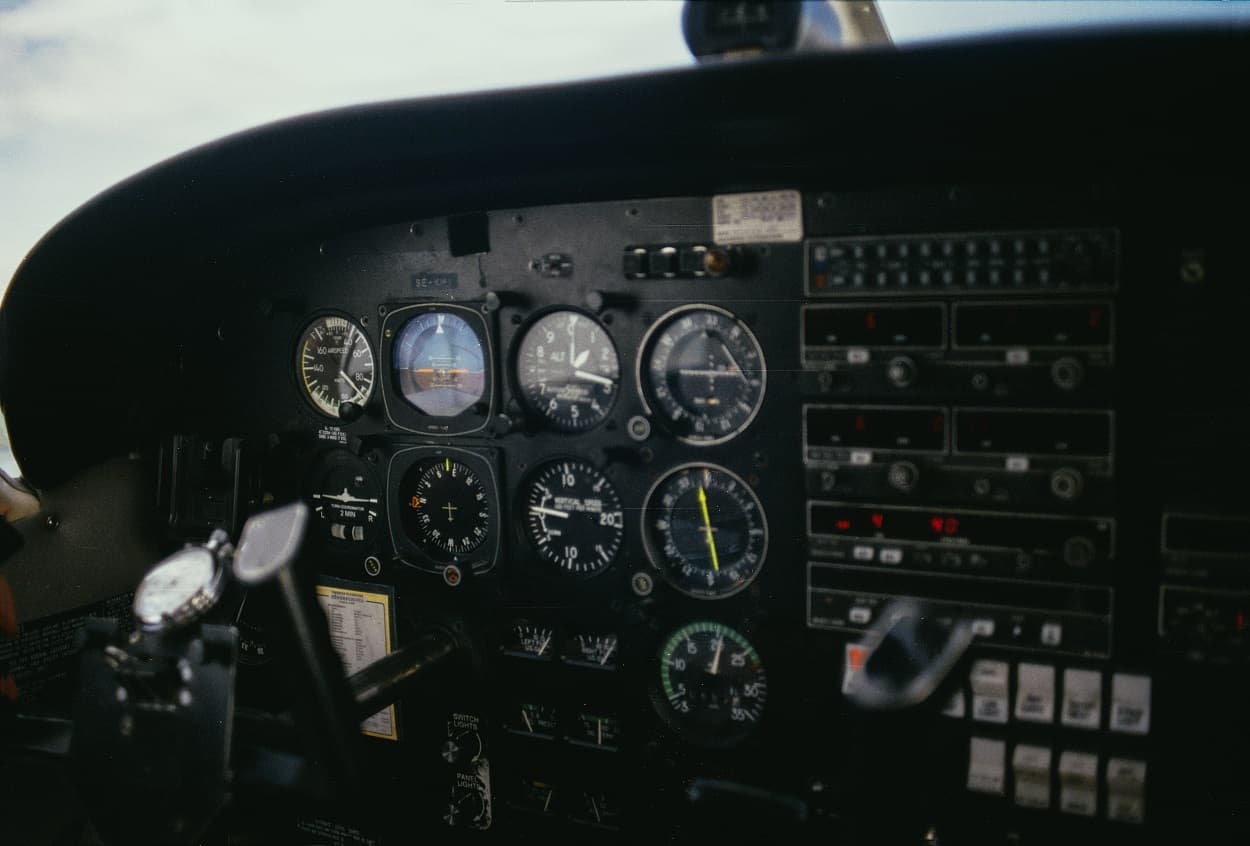 In the United States, the Federal Aviation Administration governs both civil and commercial aviation. The FAA publishes the rules and regulations in the Federal Aviation Regulations. These are commonly referred to as the FARs. FAR Part 91, Section 205 (FAR 91.205) details the minimum required instruments for VFR flight.

There are two components to the list of minimum equipment and instruments that must be working for VFR flight. Instruments required for a flight during the day is the first component. For night flights, there are also a few additional requirements.

Pilots often use tricks to remember important details, especially when it’s a long list of items that they need to know. For daytime Visual Flight Rules (VFR) you can remember the minimum required instruments for VFR flight with this simple mnemonic device:

In addition to these instruments, there are a few more requirements for night operations. To remember the required instruments For VFR flight at night, use:

Is a working radio required?

Actually, no. VFR flight does not require a radio unless the pilot is operating in controlled airspace. If so, then the FAA requires him/her to have an appropriate radio in the airplane. This is so the pilot can communicate with and get the appropriate clearances from Air Traffic Control (ATC).

What Do These Instruments / Devices Do?

For more information about what each does and why it’s important, keep reading.

The Airspeed Indicator (ASI) is one of the most critical instruments in an airplane. In addition to displaying the airspeed in knots or miles per hour, the ASI has color-coded markings that help the pilot maintain the proper airspeed to operate the aircraft safely. (To understand what the color-coded markings are for, read What Are V Speeds?)

Fun Fact: The ASI technically does not measure airspeed. It measures the pressure differential between the pitot tube and static port, then translates that into a speed indication that’s easier for pilots to use.

The Tachometer measures the engine speed in rotations per minute (RPM). The FAA requires a tachometer for each engine. It also serves two purposes. The pilot uses the tachometer to set the appropriate power setting for the phase of flight. He/she also uses it to monitor the engine to ensure that it’s operating properly.

The regulations require an Oil Temperature Gauge for each engine as well. The engine must maintain the oil temperature in a specific range in order to ensure safe, reliable operation. As a result, if the pilot notices abnormal oil temperatures, it can be an indicator of a mechanical issue.

The Manifold Pressure Gauge measures the differential between the outside air and the air inside the engine. Despite the name referring to pressure, it actually measures suction (or the pressure differential).

The pilot uses the manifold pressure gauge, in addition to the tachometer to set power settings and to monitor the engine to ensure that it’s developing sufficient power.

As your altitude increases, the barometric pressure gets lower. The Altimeter measures the altitude of the aircraft by comparing the measured pressure to the pressure on the ground.

Depending on the aircraft’s location and weather conditions, the atmospheric pressure on the ground can change dramatically. For this reason, an altimeter has an adjustment device that the pilot can use to calibrate it to the current conditions.

The FARs require a Temperature Gauge for each liquid-cooled engine. This is so the pilot can monitor the engine operation and ensure that it stays in the optimal operating range.

Most piston-type aircraft engines are air-cooled. However, even air-cooled engines have sensors to monitor the temperature of the cylinder heads for the same purpose above.

An Oil Pressure Gauge is required for each engine as well so the pilot can monitor the engine oil pressure. Aircraft engines are pressure-lubricated. Maintaining adequate lubrication is critical in order to keep the engine running.

When an engine quits, airplanes can glide to the nearest safe landing spot. Of course, we try to avoid engine failures and the need for “unplanned” landings.

Fuel Gauges indicate the levels in the fuel tanks. Most aircraft have at least two fuel tanks (one in each wing). Some have more. Because of our previously mentioned desire to avoid “unplanned” landings, monitoring fuel levels.

Pilots generally only use the fuel gauges for reference. Part of the pre-flight inspection is physically verifying fuel levels in each tank. The pilot factors the amount of fuel onboard into the flight plan. He/she then calculates the required fuel for the flight based on distance, planned flight time, average fuel burn and other factors.

The Landing Gear Position Indicator is a set of three lights that indicate whether or not the landing gear is down and locked into position. In most aircraft, all three lights with turn green when the gear is locked and secure. Pilots will refer to this condition as “three green”. Landing without this confirmation can result in a collapse of the landing gear.

Read also: Why Do Pilots Do A Go Around?

A large percentage of small aircraft have fixed landing gear that does not retract. For this reason, this only applies to aircraft with retractable gear. Because the gear doesn’t need to be put down, it doesn’t need to have an indicator system.

A Magnetic Compass is required for redundancy purposes. While most airplanes have a directional gyro as part of their navigation systems, the magnetic compass is there in the event of a primary system failure. Since the magnetic compass has no mechanical or electrical parts, the pilot will always have it available if needed to determine the required direction of flight.

An Emergency Locator Transmitter is a device that’s designed to transmit a distress signal in the event of a crash. Originally, ELTs were designed to automatically activate and broadcast a signal on the standard emergency frequency (121.5 MHz).

However, newer ELTs utilize the 406 MHz frequency and broadcast GPS position data through satellites. This makes the ELT much more accurate and also provides more useful information to rescue teams.

Just like in your car, airplane seat belts are safety devices designed to prevent or minimize injury in the event of a collision. Surprisingly, most light aircraft accidents are minor in nature. Seat belts are key in helping to prevent the occupants of the airplane and as a result, are required for all occupants over 2 years of age.

A complete set of replacement fuses is required for night operations. (Three spare fuses of each kind required is also acceptable.) The fuse is a protection device that will protect the aircraft’s electronics in the event of a short or some other electrical problem.

If a fuse blows during a night flight, having a replacement is critical to make sure that the pilot can keep the necessary navigation equipment and lighting systems operational.

The Landing Light is a bright light usually mounted on the wing or landing gear of an airplane. The light illuminates the runway (or terrain) ahead of the aircraft during takeoffs and landings. Though most runways have lights for night use, the additional light provided by the landing light gives an extra layer of visibility and safety.

There are two types of Anti-Collision Lights. Beacon lights are rotating or flashing red lights that are mounted to the top and bottom of the fuselage. These lights alert the ground crew as well as other aircraft that the airplane is preparing to move or is already in motion.

Strobe lights are flashing white lights that indicate that the aircraft is about to enter or is on an active taxiway or runway. Strobe lights can also be used to identify an aircraft when visibility is limited.

Fun Fact: Strobe lights are usually turned off in fog or cloudy conditions. They can be so bright that they obscure the pilot’s vision.

Position Lights (also sometimes referred to as Navigation Lights or Running Lights) are used to make an airplane easier to identify. In order to indicate the direction of flight, they are fitted to the aircraft in a specific manner.

The FAA requires “an adequate source of electrical energy for all installed electrical and radio equipment.” On a small aircraft, this power is generated by the engine and stored in a battery, just as in a standard passenger car or truck.