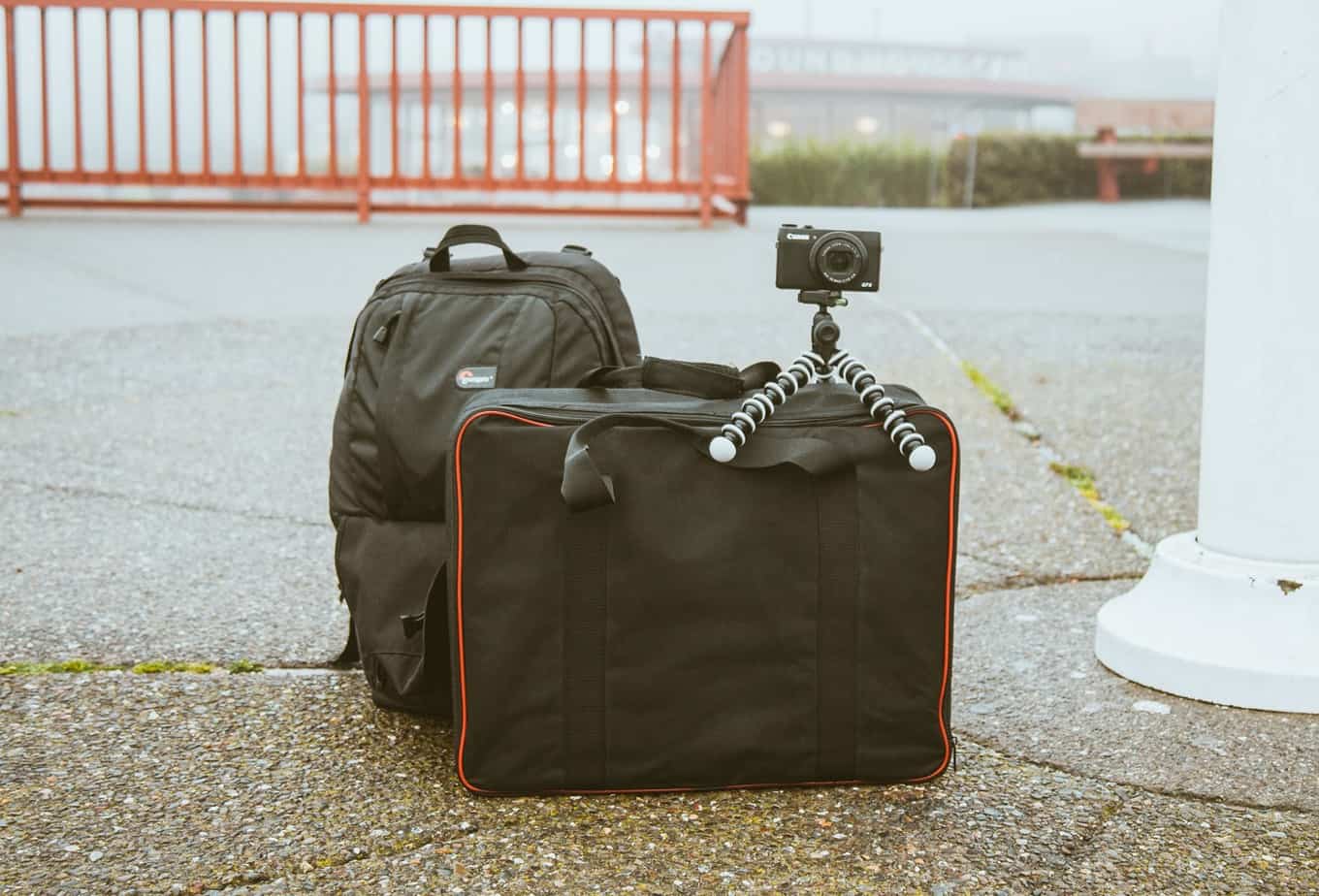 What Do Pilots Carry In Their Flight Bags?

When we see pilots walking through the airport with their bags, it often raises our curiosity as to what it is that they carry with them. While this is certainly not an exhaustive list, it should give you some idea of the most common items that you’ll find in pilots’ flight bags.

The FAA requires that all pilots have their pilot certificate with them when operating an aircraft. Most pilots, however, carry their certificate in their wallet, in the event that their flight bag was to be lost or stolen. Most things in flight bags are easily replaceable. A pilot certificate isn’t one of them.

In addition, since pilots are required to carry their certificate, losing it results in them technically being grounded until they receive a replacement.

The FAA also requires that pilots carry a current medical clearance with them. Just as with the pilot certificate, this is usually carried in the pilot’s wallet to minimize the chances of it being misplaced.

Some pilots carry their logbook with them. With that said, most do not. This is for a couple of reasons. First, it’s not required by the FAA (with the exception of student pilots on cross-country flights).

Second, it’s not a particularly good practice. A pilot’s logbook is extremely important and carrying it around with them only increases the chances of something bad happening to it. If you talk to an FAA examiner, they’ll likely tell you that they discourage it as well.

At the risk of being blunt, if a pilot’s involved in an accident and a post-crash fire turns their logbook to ash, the investigators have no way of verifying their flight experience and/or currency.

Third, with the availability of electronic logbooks, using an old-fashioned paper logbook is no longer necessary. A pilot can now keep track of all their flight time and endorsements using an iPad or Android device. If something happens to the tablet, the data is still safe on the server.

New technology has allowed pilots to eliminate much of the paper items that they used to have to carry with them. Applications such as Foreflight and Garmin Pilot provide electronic aeronautical charts, approach plates, flight planning, navigation tools, weather, and more. All of this is available on a simple tablet device.

External GPS units are also available that pair with a tablet to provide precision GPS and ADS-B capabilities. Common GPS units are the Stratus and the Bad Elf.

It used to be that pilots needed to carry paper aeronautical charts for navigation purposes. This meant having a set of charts for everywhere he/she intended to fly. It also meant that they needed to replace them every six months when the charts are updated.

This is no longer necessary due to Electronic Flight Bag technology. However, many pilots still carry paper charts as a backup. Tablets do occasionally fail. If their tablet goes down in flight, they need to have a backup means of navigation. Some pilots will carry backup tablets or will install their navigation apps on their mobile phones as well.

An E6B flight computer (otherwise known as a “whiz wheel”) is a circular slide rule that’s used to aid in flight planning. They can be used to calculate fuel burn, wind correction, flight time, ground speed, and more.

These are no longer necessary, again, due to the availability of EFBs which do all the calculations for you. However, some pilots still carry these, either as a result of their initial flight training or to go with those paper charts they carry as backups. Of course, these are also available now as electronic devices or mobile apps.

Navigational plotters are also somewhat outdated, made obsolete by modern GPS flight planning tools. However, some pilots still carry these as well for use with their paper charts. Plotters are used to determine your true course, the total distance of your flight, and the distance between each waypoint.

Most pilots have their own headset that they carry in their flight bags. This certainly isn’t a requirement, but most people that fly regularly opt to purchase their own. The alternative is using what’s already in the aircraft or renting a headset with the plane. While this can be less expensive than a pilot buying his/her own, it comes with the downside of using a “community” headset.

There are a great number of headsets on the market. They range from inexpensive entry-level gear, all the way up to professional-grade headset with active noise reduction (ANR) and Bluetooth. The cost for these range from around $100 to over $1,000. (Check headset prices on Amazon)

Even though digital flight planning tools include a “notepad” function for writing down clearances, pilots almost always carry old-timey pens and paper. Again, electronic devices fail, so you need a backup. Most pilots use pen and paper for copying clearances because it’s simpler and provides a record for post-flight review.

If a pilot is going to be writing down clearances with pen and paper, a decent kneeboard is a must. The kneeboard is simply a clipboard that straps around the pilot’s leg. This keeps it from moving around and gives them a solid surface to write on and attach their notes.

Many pilots now carry cameras along with them to document their flight. Some do this for their own personal purposes, such as flight reviews. Others may publish videos to their YouTube channels. In some cases, these pilots will set up cameras all over the inside and outside of the aircraft (see some of the popular video gear here).

Of course, with all the electronic gizmos that pilots carry today, an assortment of cables, batteries, and chargers is a must. The extent required depends on the contents of the flight bag but a pilot needs to have a backup for everything.

Pilots are all about backups.

What does a pilot do when flying at night and the aircraft has an electrical failure? The pilot obviously needs to be able to see the flight instruments, but if the lighting goes out, that becomes exponentially more difficult. In this circumstance, an inexpensive, handheld flashlight is worth its weight in gold.

Pilots should consider getting a flashlight that also has an option to minimize the impact on their night vision. Many are available that have the option of either a white or red light. It doesn’t have to be expensive. (Look at this example on Amazon.) It won’t be used that often. It just needs to work when the time comes.

A handheld radio is a must for pilots to carry. They can be used while still on the ground to pick up clearances before starting up the aircraft. They can also be used as a backup if there’s a radio failure in flight.

Read also: How Do Planes Communicate With Air Traffic Control?

Last but not least, they can be used in an emergency if a pilot has an “unplanned landing”. They are fairly inexpensive but are an absolute must.

If a pilot wears corrective lenses, the FAA requires he/she to carry a spare when flying. Of course, this is just common sense. I wouldn’t try to change contact lenses in flight, but having a spare set of eyeglasses is a simple and effective backup plan.

Most pilots carry a spare set of non-polarized sunglasses as well. Airline pilots are up in the flight levels where it’s always sunny, so sunglasses are a must.

Non-polarized sunglasses are preferred so that pilots can see the flight instruments clearly. Polarized glasses block certain wavelengths of light, which is better for your eyes. Unfortunately, blocking those wavelengths also makes it nearly impossible to see the video screens in the cockpit. Since many aircraft have at least a partial “glass panel”, this is an issue.

Again, pilots that are up in the flight levels have constant sun streaming in through the cockpit windows. For this reason, many pilots carry sunscreen to prevent sunburn and skin damage.

A pilot never knows when he/she may be delayed or get stuck on the ground due to weather. Or sometimes, a pilot just gets hungry in flight. Having some water and a few snacks at the ready can make all the difference.

Part of the preflight process on a small aircraft is testing the fuel. This is to make sure that the fuel is clean and that any water that has accumulated in the tanks is drained. A small fuel sampling device serves this purpose.

Many pilots carry a small assortment of basic tools, such as a screwdriver, multi-tool, and pocket knife. These can come in handy for a variety of tasks, such as inspecting the aircraft and making minor repairs and adjustments.

Pilots that fly at high altitudes often carry pulse oximeters in their flight bags. This is an inexpensive device that measures the oxygen concentration in the blood. This is critical to monitor in an un-pressurized airplane to make sure that the pilot doesn’t become hypoxic.

A Person Locator Beacon is a common flight bag item for pilots that fly over long stretches of water or remote areas. Often, these PLBs are water activated so they automatically start transmitting if they get wet.

For pilots that fly in remote areas, they may also carry a range of survival items such as survival rations, a space blanket, a fire starting kit, water purification tablets, and much more.

Commercial and/or Airline pilots may carry additional documents as required by their employer. Often, this includes aircraft manuals for the equipment they fly. It also may include the airline’s procedures manual or other carrier-specific documents.

Pilots carry a large range of items with them when they fly. While there are many items common to most pilots, many of the items are mission-specific. Pilots are driven to be prepared for any situation. They are driven to have backup plans and checklists. The contents of their flight bags reflect that.